Penguins all over the continent of Antarctica begin to migrate to various nesting groups in the southern hemisphere, in some way they find their very location of hatching in March. There they lay the eggs of the next generation. These penguins sometimes travel up to 100 miles to get there.

The migration patterns of penguins create a glorious spectacle. They follow the migration behavior of their ancestors. They travel every year to reach pre-programmed, inland spots for nesting which are about 100 miles away. They develop a migration ritual that allows them to move from place to place to meet survival needs.

The distance to which they migrate varies according to the cause, the environmental conditions, and the species. The Ross Sea Adelie penguins travel about 13,000-17,600 kilometers annually to their breeding colonies, while some Magellanic penguins can move about 4,828 kilometers for survival.

Penguins need to travel from one location to another as the ice and snow start building up to envelop both the land and water at extreme levels, making the Antarctic habitat a tough region to survive during the winter. The weight of each penguin plays a significant role in their survival.

As a rule of thumb, as far they are from the equator, the more likely they are to migrate. They would love to stay in a place only if the conditions would permit.

Migration for penguins is a life or death event, and it’s one of the most important in their life. The youngest penguins have to suffer a lot, and it is a difficult task to migrate for them, but if they do it once, it is easier to endure on the next migration. Most of the young penguins do not survive the migration trip.

Migration can be done by walking or swimming, but the emperor penguins do it by using their legs and bellies to march on the snow and ice. 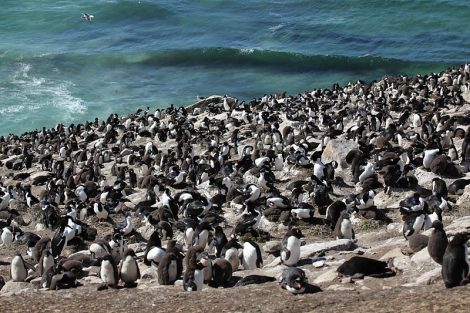 It is a miracle for sure on how penguins are guided to arrive at the same place every year, or how they orient themselves. Many believe that their knowledge perhaps guides them or they recognize the direction of the sun. However, some individual penguins lose their sense of orientation or for some reason move away from the group with whom they migrate. Hence, get lost while migrating.

The beginning of the migration takes place on land, except for the emperor penguins, which begin their journey from the marine regions to several kilometers inland.

What Kind of Penguins is the Amigos in Happy Feet?