Penguins can walk backward only in frightening situations and not normally. If they walk backward, they may fall due to the bulky body. Since penguins are heavy flightless birds; they can only waddle or sometimes waddle faster in case of a threat. They cannot walk backward with no trouble.

Penguins are proficient in swimming than walking. For walking backward, the feet have to lift, which may cause a fall back of penguins. Naturally, penguin’s leg and feet are short to balance its whole body, which led the penguin’s waddle.

Penguins cannot balance their body mass even while walking forward; they face a lot of difficulty in walking on land. Walking backward is a much more difficult task for penguins to do.

Since penguins cannot turn its head to see back; they even can fall while trying to walk backward. Birds fly and swim; walking is an occasional movement that their body accomplishes.

Other birds that can walk backward:

But, naturally, birds cannot walk backward with ease. They may find it hard to act since their body cannot be balanced by their small feet when they do an action which they are not used to do regularly.

Even though penguins waddle on land, they can do it faster when they face any threat and can also progress humans when running on ice or snowy land. Penguins spend their maximum life at the ocean, and they are easy with swimming rather than walking.

Certainly, penguins waddle to save energy. They can walk for a long distance without getting tired. They walk with a speed of about 1 or 2 km per hour normally; in a frightening situation, they can walk much faster.

Balancing on one foot to do any actions like scratching, can cause a sudden fall and might be not easier to do it. Since the body is torpedo shaped, it makes penguin swim effortlessly than any other movement.

The flippers help penguins swim in the water which almost acts like wings and are responsible for efficient swimming giving an illusion that penguins almost fly in the water.

Since walking is difficult amongst penguins; when they fall they prefer gliding on the icy surface and relax by the way to gain little energy for the rest of the movement. They glide by their bellies which make it much fun and also ease out the job of walking.

To minimize the effect of chillness, penguins lift their toes and stand on their heel. For the marine bird possessing this behavior, make it a natural one to walk with the toes up.

Moreover, the legs of the penguins are placed straight to the body, where the legs of other birds placed in the middle of their body. It involves tremendous effort for the Penguins even to walk.

The weight of the penguin’s body is much higher than any other birds that live in the marine. The heaviness in the body tends them to walk meekly. The gait mannerism of penguins along with the body mechanism cannot contribute to helping the penguins walk backward.

Some birds or animals can be trained to walk backward which may not be their natural behavior. Even though penguins have knees like humans, they cannot balance their body to walk backward.

Humans can walk backward with the brain functioning to communicate the reverse actions, which involves a lot of energy. In the same way, penguins can feel it extremely difficult to walk backward for some time. 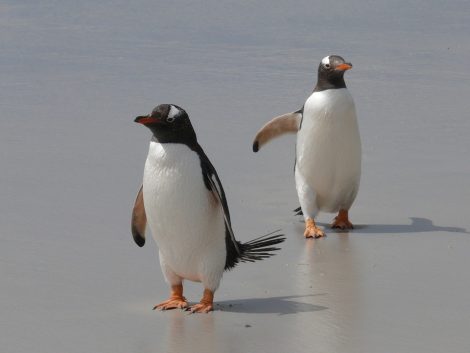 Since penguins find difficult to walk forward with their naturally gained unfriendly body, it is not easy for them to walk backward in the marine wild.

There are also instances where researchers and visitors to Antarctica found Gentoo penguins walk backward few steps when alarmed. Big sized penguins like emperor and king penguin may find it, even tougher to walk backward.

The chief method of locomotion amongst penguins is swimming and thus walking backward is a hard task unless if it happens under a condition of danger or anxiety.

What Kind of Penguins is the Amigos in Happy Feet?

Where do Penguins Keep their Eggs?