Where Do Macaroni Penguins Live?

Macaroni penguins are the most common species of the penguins in the world that named for its colorful feathers of the golden-orange temple peak. Its scientific name is Eudyptes chrysolophus.

According to the researchers, more than 11 million of the breeding pairs of these penguins inhabit the Southern Ocean. Although the breeding figures of the species are still comparatively high, investigators have observed a distressing decline in these penguins, probably owing to change in climate and its influence on food supplies of penguin.

But do you have any idea that exactly where do macaroni penguins live?

To know about the detailed answer of the above question, you have to read the below information in which we will share with you the places where you can find the macaroni penguins and how they survive in such areas.

Where can we find the Macaroni Penguins?

Macaroni penguins are the big size aquatic animals which are present in an abundant amount in the South Pole. The habitat of these penguins ranges from the Sub-Antarctic to the Antarctic Peninsula comprising the Heard and McDonald Islands, northern South Shetland Islands, Crozet and Kerguelen Islands, Prince Edward and Marion, as well as Bouvet Island. Even though, these birds hunt for food in the groups which might range from the north to the islands of New Zealand, Australia, Tristan da Cunha, southern Brazil, and South Africa. 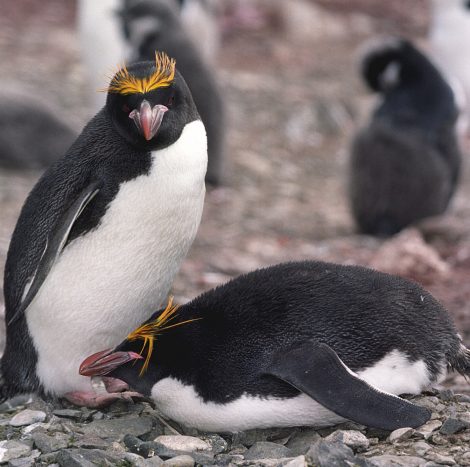 Are there any places besides the natural habitat where we can find the macaroni penguins?

Macaroni penguins are also known as the migratory birds. At the time of the non-breeding season of these penguins, these birds cannot found nearby the land. While hunting, the macaroni penguins diverge in groups for the entire way to the various islands of Australia, New Zealand, southern Brazil, Tristan da Cunha, and South Africa.

So, if somebody asks you, that where do macaroni penguins live, we hope now you have to the better answer to reply.

Macaroni penguins are the beautiful and colorful Antarctic penguins that have yellow and black feathers which extend from over the beak. You can found them in the Antarctic Peninsula as well as its islands. They usually breed in big colonies besides the oceanfront.

But now these penguins have deliberated a susceptible species which faces threats from oil pollution, commercial fishing, severe weather, and climate change. We should come together to save them from all these dangerous villains.

If you still have any question about the places where the macaroni penguins live then, do let us know. We will answer you soon. Don’t forget to share the above info with all your friends who are in search of the penguins related above info.

Where to See Penguins in New Zealand

How do Penguins Adapt to their Environment

Do Penguins Have Nests?

Do Penguins Live in Igloos? How Do They Make Them If They Do?