Penguins spend their maximum of life in the ocean. Even though they are flightless marine birds; they are efficient swimmers. Penguins swim with the help of their flippers which acts as also wings in the water. The waterproof feathers protect the penguins from the harsh cold and keep them out of wet.

The other main contribution to swimming is their body structure; the streamlined torpedo-shaped body aids them to swim precisely and smoothly.

The way penguins swim in water is almost similar to that they fly in the water. While waddling on land, penguins appear to be funny and clumsy; whereas, in water penguins swim fast spectacularly with a lot of grace.

Since emperor penguins are the species of penguins that are big, they can swim for a long time and also travel in the water for long distance while hunting. The next big penguin is the king penguin which stays in the area where there is no snow, is the second largest species and can swim to the quite less distance when compared to the emperor penguins. 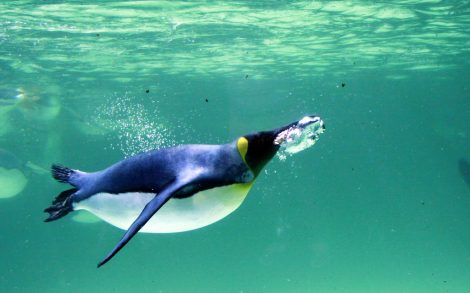 Features that help penguins swim effortlessly in the ocean:

Penguins’ body designed in such a way that they are good to swim and dive rather than walking effectively on land. They can stay underwater with one deep breath.

The flippers of penguins are the main element to propel them in the water to move smoothly. They bend the angle of their wings to downwards and upwards to drive them effortlessly to perform the upstroke and downstroke.

Even though air bubbles trapped in the tiny plumages, penguins tend to be submerged in water because of the solid bones and thus both the features reduce buoyancy.

The mechanism of swimming underwater, nowhere harmed by the air bubbles and the solid bones. They help penguin to have a rocket speed of push to the water.

Stubby and muscular flippers of penguins work well to fly underwater which is not useful for the creature to get airborne. The big webbed-feet of penguins help them in better swimming in the ocean.

The stream of air bubbles trapped in the feathers; propel them from underwater to achieve the speed in swimming. The water-resistant plumages don’t make penguins feel the cold and resist the water touching the body.

Unlike other birds, penguins need not spend time in drying up the feathers under the sun for a long time once they are back from swimming. Penguins also get airborne only when they force from the water to the icy land.

Penguins also have knees which are compressed in the body while swimming and never let it work when they are in the water. The head kept close to the neck, and the legs are lined back to enhance the procedure of swimming.

The thick tails also afford the smooth errorless swimming, which is along with the body structure. 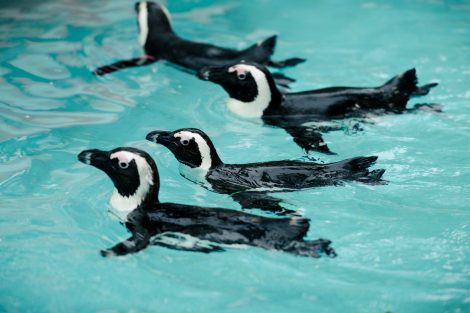 Emperor penguins dive in holding one breathe and stay underwater for throughout their hunting period of nearly 25 minutes. Other species of penguins also dive in single breathe but the time of staying submerged depends on the species.

They dive deep with single breathe and uses the oxygen present in the muscles when they are in need of oxygen.

Researchers found that penguins follow two different way of using the oxygen when they are underwater. In one way, they stop the entire blood flow to the muscle and keep the body depend on the blood oxygen to make brain and heart function.

When the oxygen drops, penguins selectively send the extra oxygen from the blood to the muscles and prevent from getting tired. When the blood oxygen level is found to be too minimum, penguins have to give up and leap up for air.

When penguins and ducks swim, they may look similar in using the technique, but in reality ducks and other birds that swim in the water use their feet to move whereas, penguins use their flippers to maneuver.

All the 17 different species of penguins has its characteristics, but the swimming nuances remain the same. Penguins also float in the surface of the water just by depending on the natural buoyancy of the body when submerged in underwater.

Penguins do every single act in the marine world without effort, except the waddling walk. The bulky body of penguins may not be friendly for their gait, but it doesn’t bother them when they swim.

Penguins also porpoise to escape from the predators; the speed of porpoising is greater than the fly in the water, due to the density differences. The beautiful bird species on earth which looks adorable while swimming in the water is the penguins.

How do Penguins Adapt to their Environment

How Many Eggs do Penguins Lay?

How Might Penguins Be Able to Survive at the Equator

How Do Penguins Keep Their Eggs Warm?